“Princess Spike” vs. “Party Pooped”: when is failure funny?

By conventional wisdom, this is not surprising; Spike episodes are frequently unpopular.  And “Princess Spike” typifies a common complaint about Spike episodes; they usually feature Spike failing miserably.  And yeah, I found it painful to watch as the little guy utterly shit the bed for 22 minutes.

If I wanted to endure a half-hour of abject failure, I’d just go on a date.

Film Crit Hulk has an essay entitled “Tangible Details” that simultaneously does 2 things for me: it makes me 1) really excited about analyzing fiction, and 2) never want to analyze fiction ever again.  The TLDR: it’s possible (and common) to be mistaken about the reasons you like/dislike a work (or anything, really).  People will often focus on the titular tangible details, missing the real source of their troubles:

THERE ACTUALLY SUBCONSCIOUS WAY IN WHICH MOST OF US ABLE PROCESS SIMPLE GOOD OR BADNESS OF JUST ABOUT ANYTHING…BUT WHEN COME TIME ACTUALLY EXPLAIN [what’s good or bad], NOT EVERYONE HAVE LANGUAGE/VERNACULAR TO BEST EXPRESS WHAT AT PLAY. SO ONLY WAY CAN EXPLAIN ANYTHING BY PRESENTING EVIDENCE. AND EVIDENCE 100% DEPENDENT ON THINGS WE NOTICE. AND THOSE THE TANGIBLE DETAILS.

… and FOR MOST PEOPLE, IT NOT ALWAYS THE RIGHT DETAILS PER SAY, BUT INSTEAD THE ONES THAT SIMPLY STICK OUT MOST.

Spike’s ineptitude sounds a lot like one of Film Crit Hulk’s Tangible Details.  Especially since in most good stories, protagonists screw up and things go very wrong.

Case in point: “Party Pooped”, which I thoroughly enjoyed.

Much like “Princess Spike”, “Party Pooped” is a story in which everything goes horribly wrong.  The protagonists fail miserably until the last few minutes.  Yet I enjoyed it much more than “Princess Spike”.  Why?

There are probably many reasons, but here’s one major difference between the two episodes: the timing of the consequences of failure.  The consequences of the Mane Six’s failures in “Party Pooped” occur throughout the episode.  In fact, they’re the primary source of the humor; watching as the Yaks smash everything and the Mane Six freak out is hilarious. 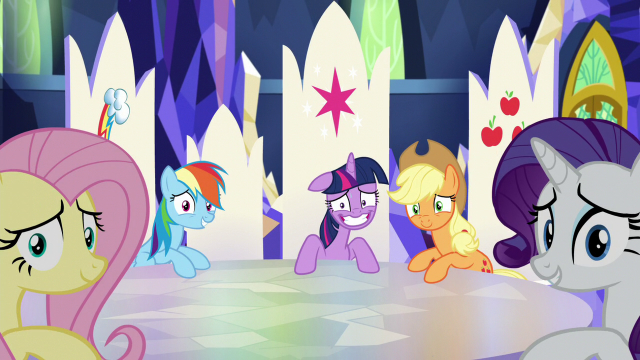 Apparently, I really enjoy watching cute characters have nervous breakdowns.  That probably says something about me as a person.

By contrast, Spike’s failures in “Princess Spike” don’t really bite him until the last few minutes.  This means that for the first 18 minutes of the episode, we all know that something horrible is going to happen — but it hasn’t yet.  This is very effective for building suspense, but that suspense is painful, rather than entertaining (for me, anyway — YMMV on that, of course).

Want to know when I’ve thought of something new and interesting about the narrative techniques of My Little Pony: Friendship is Magic?  Yeah, neither would I, probably.  But just in case, you can suscribe via email at the top of the page (right side), follow The Pony’s Litterbox on Tumblr, or follow me on Twitter.

1 Response to “Princess Spike” vs. “Party Pooped”: when is failure funny?